In order to carry the mission, communication by radio or wireless transmissions were needed.
However, the disadvantage by using these forms off communication is it can also be picked up by others.

On land, there were telephone lines that could be scrambled and much of the data was sent by teleprinter.
However In the air, all the tranmissions were sent and received in the clear.

It was therefore important to keep radio silence but if communications were needed it was done in such a way that the meaning of the message was not clear.
In other words in code.

There were 3 ways of communicating while in the air:

In order to ensure that the other party on the radio was not the enemy, they were using recognition signals.
An operator challenges the other party by naming a letter (letter Challenge).
The counterparty must reply with another letter (Answer letter).

Another form was the usage of flare color combinations.
For instance Red-Red,

This combination of letters and flares changed every 6 hours.

They also made use of callsigns and code words which could not be associated with the function of the station or the message.
As an example we take look at the 92th BG from the 1st division.
This group consisted of four squadrons, and each one of them had their own callsign.
These squadrons would have a three letter code for usage in morse traffic.
The letter combination was then supplemented by a 4th letter that corresponded with the radio letter of the plane involved.
In this way, one could determine the precise identity of the aircraft.
For the 92nd BG it looked like this (also included are the squadron letter codes) 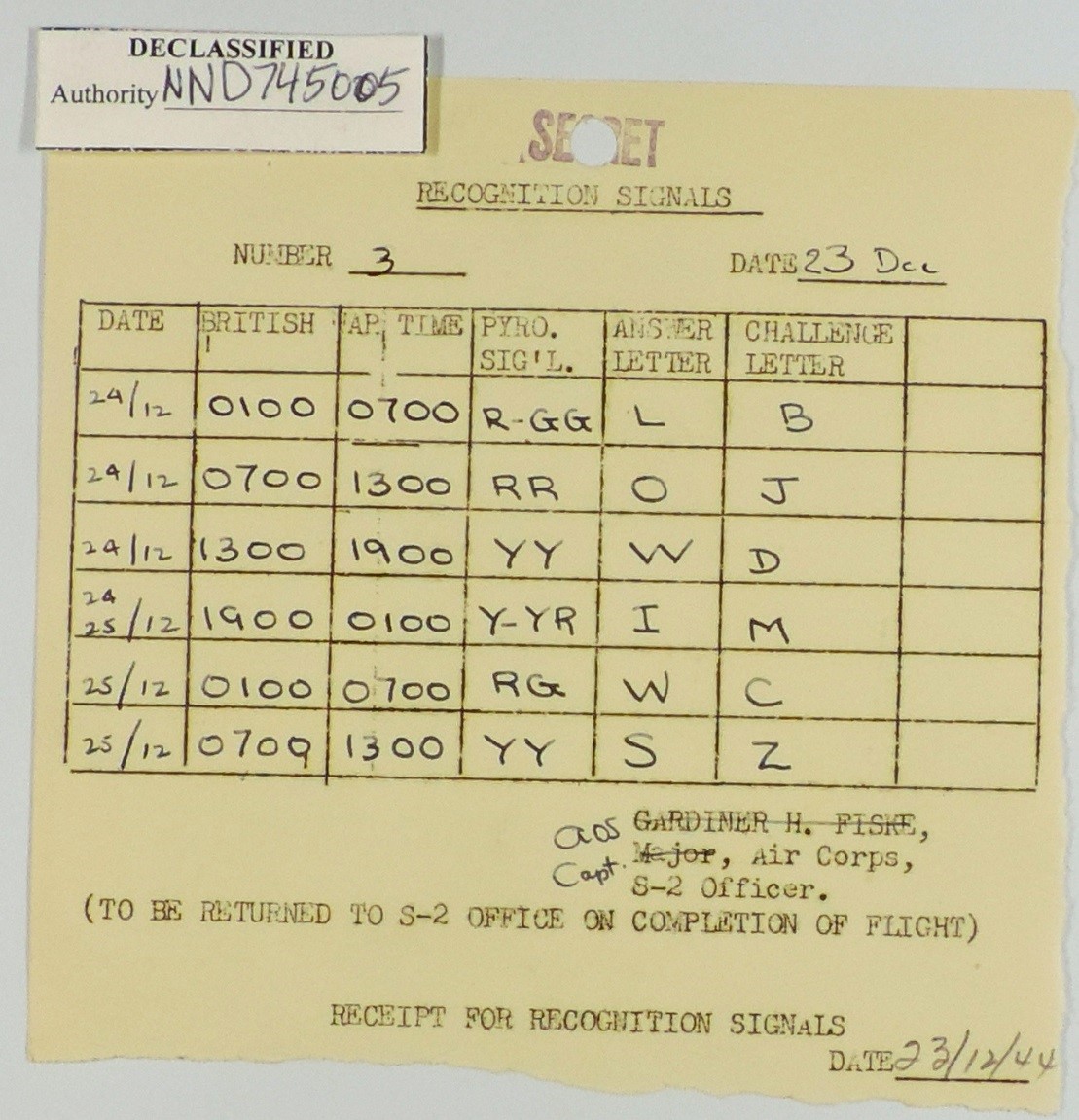 The callsign of B-17 44-8367 / UX-S will be on the radio DAVEY S and on the W/T JYKS
All 152 different bombardment squadrons in the 8th AF had their own callsign and W/T lettercombination.
A further detail of the W/T traffic is that one of the characters was to be transmitted twice.
This letter was indicated by a line under the letter concerned in the documents.
Only the parties in possession of these documents would know which letter was to be sent double.

Each combat wing also had its own callsign.
Several groups were flying in every combat wing and to identify those groups the callsign was often supplemented by a color or letter.
Finally, the position of each squadron in the group formation was also indicated.
As an example we take a look at the 13th CBW of the 3rd Division.
This Combat Wing flew with a total of six groups on December 24, 1944.
The callsign of the 13th CBW was FIREBALL, with a total of six groups the following callsigns were used:

Above the C stood a line which meant that that letter was sent two times.
A W / T message for all 3rd division aircraft was therefore sent to RZNCC.

There was also bomber to fighter communications. All fighter escorts had the callsign BALANCE.
This call sign was supplemented with 2 numbers. The first number was for the attack wave, the 2nd number stood for the specific fighter group.
One fighter group was to protect several groups of bombers.
The first three groups of the 4th CBW flew were protected by two groups of the 357th FG.
If the bombers in these groups sought contact with their escort, they had to make contact with BALANCE 1-1 and 1-2.

In addition to the many call signs they also made use of code words and/or flares.
During the mission, there were times when code words and/or flares were used to transmit their progress of the mission.
One of those times was when they arrived at their IP (Initial Point).
At the IP the desicion was made how to attack their primary target or to proceed to their secondary target.
These code words varied per target.
Take for example the IP code words of the 445th BG, 448th and 467th BG BG:

The code word for "bombs away" for the entire 2nd division was SILVER DOLLAR followed by the radio call sign of the bomber.
This message was sent by the lead plane of each formation. If it was decided by 8th AF HQ to abort the mission while they were already en route a codeword was sent via W/T
For example 445th BG the codeword PIKE would be sent.
It was also possible that the whole mission would be recalled or just a small part.
If the 1st division would have to abort the mission HLVN (How Love Victor Nan) would be sent to them via W/T.
If only a part of the 1st division, for instance 41 "C" group, had to abort the letter combination LMR (Love Mike Roger) would be sent to them.

Flares were also used by lead aircraft of each formation to give information to the rest of their group or wing.
These flares had different colors and sometimes there was a combination of colors fired.

That meant that at the IP a radio message was sent to HQ with the codeword how the target would be attacked.
At the same time, there was also a flare fired in order to inform the rest of the formation which target was attacked.

For example the 392nd BG could use the following flares :

The control towers at each airfield each had their own callsign. If an airplane wanted to make contact with the tower they would use this callsign instead of mentioning the airfields name.
What is striking about the nicknames and callsigns is that they all have multiple syllables. The chance of a miscommunication has become less because of it